I was going to title this blog “The Building Blocks of Math Construction” because I liked the play on building/constructing learning from material things. Really, though, I think the most important thing about this lesson was plain old ACTION. Yes, it was creative and fun, but rather than teachers reproducing the exact lesson, I want to share the philosophy behind it. It is a difference between building a beautiful, popular burger joint that everyone in a region admires and franchising the concept all over the world.

In preparing a blog, I thought, what I really want is for Ts to benefit from these ideas… I want them to pirate them… Ting is the most open-source thing in the world… #PleasePirate 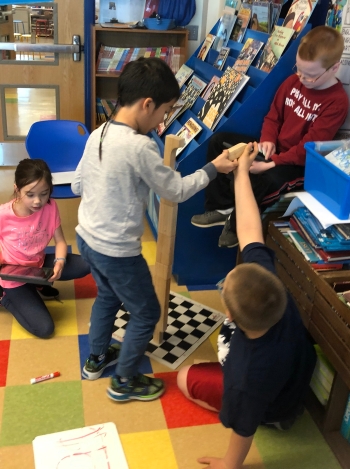 This is what I did. In thinking about teaching money, I was imagining setting up some kind of store in the classroom. In stead, I brought my daughter’s old school, wooden building blocks into the classroom. I thought I would have the students compete to construct the tallest structure while using the least amount of supply: They would stack blocks of value to create vertical towers and add up what it cost them.

difficult to construct with; Those were on sale. They were half off. Here the kids would be using their recently acquired fraction skills. Lastly, there were two gigantic 28cm blocks in the box. Those were $2 each. Why? Because that’s the number that popped into my head. Also, these are super valuable because they are so solid and long. The kids can evaluate the price of these versus the others.

After talking cost, I started centers and left my top kids to figure out constructing cost-effective building on their own, while I conducted guided reading. The buzz from the back corner was electric. Everyone in the class was dying for their chance to add up the cost of blocks!

Halfway through the first center, I stepped away from my guided reading group to check on my little architects. How were they doing?

Rather than constructing a tall tower, this group of three boys and three girls were designing the most beautiful condominium complex you ever saw. They were finding a way to use every single block they could! At first, I was like, “That wasn’t the objective.” But, I caught myself. 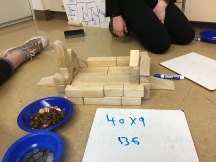 I forgot to mention: I had introduced the whole idea through telling the class that they were going to be designing high rises in an urban area. We would have Lego people rent space in our sky scrapers.

This group was not making a cost-effective creation. Was that wrong? No. No, it wasn’t. “Okay,” I managed to say. “This is going to be pricey,” I told them. “You’ve built a Five-Star resort, here,” I joked. “Let’s add up how much it will cost to construct.” They jumped on taking it apart, putting the blocks into piles, categorizing by the characteristics I had assigned, earlier. I told them that they could reconstruct their building after figuring out the price tag for it. Amazingly, there wasn’t a breath of complaint. I’m pleased to report 100% success, albeit after quite some time. 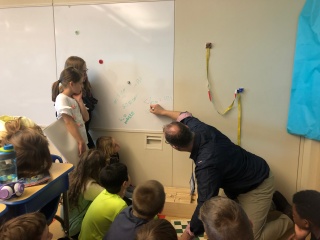 After this experience I realized that the rest of the groups would probably need some guidance with this project. I decided to use math time to teach how to evaluate constructions. While students did some online work, I brought groups over to the construction corner of the room. I went over the prices of each of the four styles of block. We analyzed similar blocks and categorized them according to cost. Then I built a simple structure with one of each price. Students used dry erase boards to add up the cost. I also had manipulatives (plastic coins) there to help. It took a few tries, and as students showed success, I let them build a four block building. They had to add up the cost before moving on. With each success, they were able to build more. 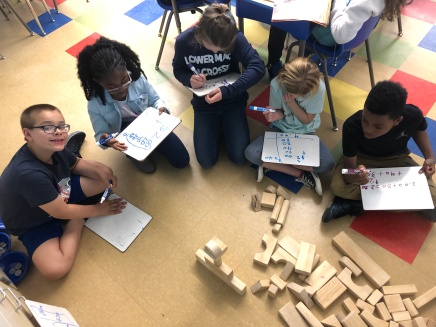 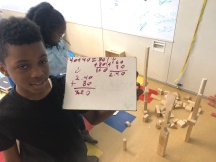 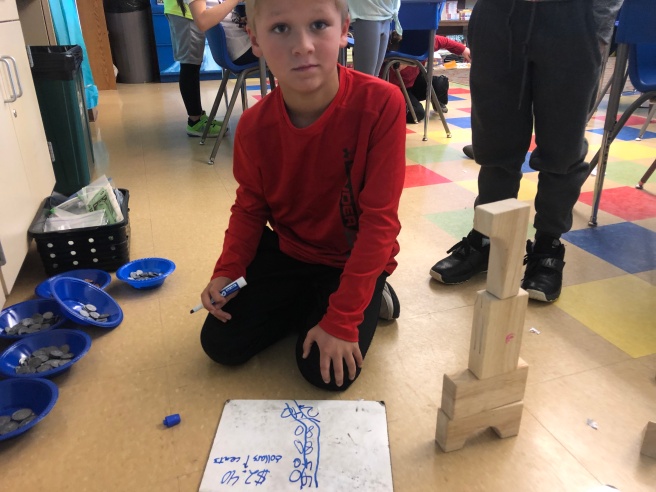 I grouped students with like abilities to work together. There was a group that did so well so quickly that I let them work in teams with more than four blocks. None of my builders cared too much about making their towers tall, even though the example that I gave them was straight up, as tall as could be with one of each style of block. I did not emphasize this, either.

Students had a blast building their block structures. One group built a road. Why not?

One thing I would change, and I was tempted to change this halfway through the lesson, is the pricing. I didn’t like that half the price of the 80¢ block was the same cost as the smaller one. The smaller blocks should have been 50¢. Then there would have been more variation in the numbers and coins. Kids would be counting with quarters.

This was solved the next day. We revisited our building blocks motif, but this time with the vertical challenge. I explained that they were constructing in the inner city. I had actually looked up the price of the average urban block. “A city block in Manhattan is worth ONE BILLION DOLLARS!”

“What?!” Screamed the class with gasps of horror. 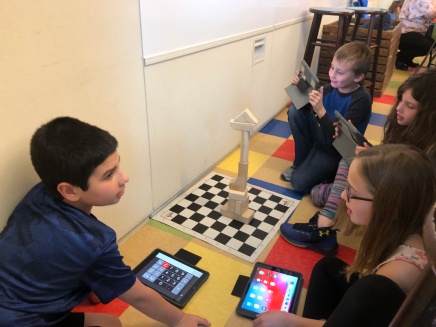 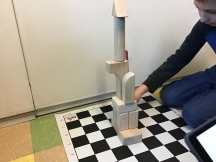 I had them use my vinyl chess mats as city plans. Each block or square would cost them 75¢. The trick is that for every inch of vertical they could collect 25¢. I formed a bunch of groups and spread students out all over the room, dividing up the blocks. In seconds the room was a buzz with builders. It wasn’t about how tall their building was, so much as how much money they could make.

My students were on fire. They had no idea they were even doing math! I am planning on putting together an elaborate assessment involving an urban plan where city block prices vary, depending on proximity to highway exits. I’ll redo the price of blocks. I’m even thinking about including fractions or weight! We love a challenge.