Over the weekend I finally experienced “Teach Like a Pirate”. I listened to the recently produced (Jan. 2019) audio book, read by the author, Dave Burgess. There were tons of great take aways, some of which immediately developed in the first math lesson, Monday morning!

First of all, if you haven’t already gathered, I am one of the “freaks” that Dave mentions at the outset of his book: I bubble with passion, naturally and eternally. I live for teaching and love “bringing it” every day in every way. In addition to this, possibly because of this–There is definitely some cause and effect, here–I am quite creative find it easy to come up with new, innovative ideas. I left my accidental slip of type in the last sentence because it reminded me of one of my favorite points from “Teach Like a Pirate”: The six worst words that Dave Burgess has ever heard (loved that chapter!)

Monday morning, I was getting ready for the day and week, when an idea hit me: Have students learn time through using it to plan a party. We have been working on elapsed time for a couple days, and there are lots of ways to use real-life scenarios, but are any of them more fun than planning a party? Definitely not. I’m pretty good at hook-development, but it certainly didn’t hurt me to hear Burgess talk about it in “Teach Like a Pirate”! No more hook was necessary than “Today we will be planning a party.” I didn’t have to count to get kids on the carpet. They came ready to contribute… to their own learning!

Through discussion, I let the hook sink deeper and deeper, so that the students were mesmerized with math. I refused to answer the question, “Are we actually going to do this party?” I upped the ante when a student suggested that rather than include “Set Up/Clean Up” in our 60 minute time window, “We should just set up before the party and clean up when it is all over.” This sounded perfectly reasonable to everyone, but I told the class that “We will be renting a ballroom that costs $250 an hour. We don’t get the room until noon, and if we go over our time, the price doubles. So, we have to squeeze all of our activities within this 60 minute window.” And then I added, “Also, we have to include plenty of time for clean up, because the hotel will charge us extra if we leave it a mess… plus, that wouldn’t be classy.”

Boy, were they hooked. I mean I have never seen a group of students more engaged in discussion and riveted to each utterance! Every hand was shooting up with ideas. Who doesn’t want a party? The first thing I did was facilitate brainstorming of ideas of things to do at our “Math Party”–That’s what I called it; This wasn’t just any ol’ party; It was math-time, and that’s what we are doing; Make no mistake about it; You will learn math by the end of this. Many students were sharing themes. I praised “Pajama Day” and “Electronic Day”, but redirected to coming up with events that actually take up time. “We can make crafts wearing pajamas or with electronics, but it is the building-of-the-craft that takes up time,” I explained. So that the students felt heard, I wrote the theme ideas on the side.

During the brainstorming time I was building rapport. Not between myself and the students–that happened in September, and I had plenty of it–but between my students and the subject matter. Remember, I am teaching them math through all of this! The way I see brainstorming, it is like student ability: Every kid can do the math, some faster, some easier, some needing patience, help, and additional explaining. In my brainstorming sessions, every idea is acceptable. This makes it fun and funny, also. When a kid suggests a water event, I say, “Did you just say No-holds-bar-water-balloon-war!?” The classroom erupted… and the ideas poured in like the water filling those metaphorical balloons. Just as a teacher needs to redirect thought to shape learning, I rephrased student ideas to write a list of potential party events on the whiteboard.

Next, I drew a circle with ticks or lines that made the circle look like a clock. But, I didn’t write any numbers. I pointed out that there were 12 increments. Students mentioned that it resembled a clock. I agreed, but told them that this was a measurement tool, instead. I asked how much each segment was worth, reviewing our fraction sense: one increment was a unit fraction of 1/12. “If the circle represented 60 minutes, how much was each segment worth?”

That being established, we worked together, discussing how long the events might take. Students made suggestions as to which events we would want to have in our party. As students shared ideas, I filled in the pie graph. (I didn’t tell them that this is what the circle was, until afterward.) “Wait a minute, we have a lot of fun things planned, but what about set up/clean up time?” I inquired. “It’ll take some time to fill up enough water balloons to have a 20 minute war! And, we better plan on cleaning up all of the debris.”

As I filled the pie graph I asked questions like, “How much time do we have left?” And, “What fraction of all of our time have we used up?” Here is a tough one: “Of the time that we have planned, what fraction is eating?” This forced them to come up with a new denominator. You better believe we reduced our fractions to their simplest form each time, as well!

When done, I had students analyze our pie chart with questions like “Which two events equal the same amount of time as Water Balloon War?” After several of these, and Turn & Talk partner sharing, I modeled taking the information and turning it into a bar graph. First, I asked, “Why don’t we have to bring the (y axis) all the way up to 60 minutes?” Students knew to only go as high as the greatest amount of the events. After making the graph we did some more analysis: “How much more time will we be soaking each other with water balloons than eating?” 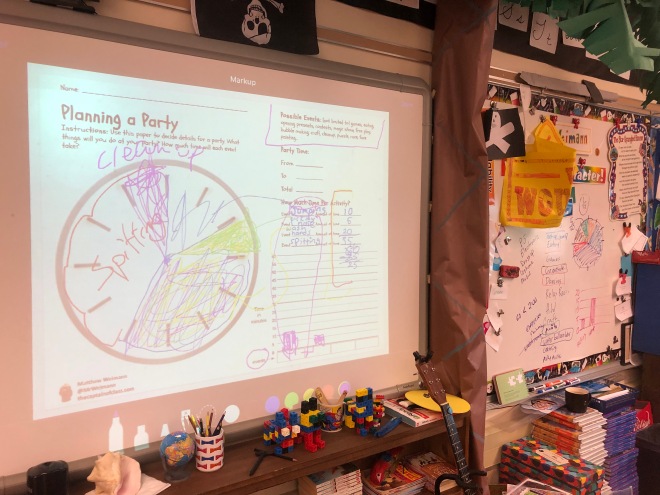 Finally, it was their turn. I showed the class the graphic organizer that I had made for them. They gasped when they saw that it was exactly like what we had just made. Because I presented it screen mirroring my iPad, I could quickly draw all over it. I showed them how they would plan events, fill in the pie graph, and make a bar graph. I told them that they weren’t allowed to use the same exact ideas that we had come up with together. They could have “eating”, but not the same amount of time. In other words, don’t copy, create. They were all cool with that. I stimulated this by writing crazy ideas on the graphic shown on the board: “Picking nose for 5 minutes, followed by washing hands for 20 minutes… because that was gross!” They loved it. 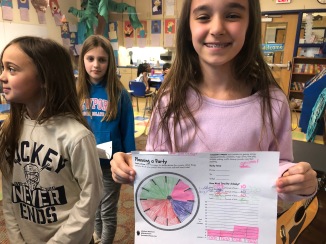 When everyone had their paper the room was abuzz with feaverish creativity. No one, not even my “I can’t think of anything to write” students, was stumped for ideas of things to do at a party, albeit “Math Party.” As students brought me their papers, they continued to ask, “Are we really going to do this?” All I did was raise my piraty eyebrows.

Google slide with graphic organizer for convenient printing and reproduction. Please pirate this to use as much as you like:)