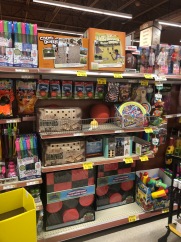 My dad and sister visited over the July 4th weekend. When I was at the grocery store picking up supplies for grilling, I was meandering through the toy aisle searching out things to keep people occupied. We have a pool, and everyone will want to hangout by it, but as great as water is, it gets boring, eventually. My eye was caught by some outdoorsy games; GIANT dice, checkers, and… dominoes. I brought home one of the giant wooden domino sets. There was only 28 pieces in the set, but maybe we could figure out the game, together.

July 4th was a blast… literally, what with all of the fireworks and everything! But, the next day was much slower, and it slowed all the way down to “needing something to do”, so much so that I actually got out the giant domino game. There was the tiniest slip of paper under the huge wooden tiles that had the most basic instructions I have ever read. It was my dad, Scarlet, and I working on playing the game, and after giving it a go, we realized we needed more instruction. Other than setting the pieces up to tumble into one another, I don’t have any experience with dominoes.

We watched a Youtube video. It introduced some terms, like dominoes can be referred to as “Bones”, and the pile of extras would be the “Boneyard”. The instructions for play were either not elaborate enough or too complex. I thought this was supposed to be a pretty easy game! I had secretly hoped to bring the giant game pieces into my classroom to use instructionally.


Finally, we found a guy on Youtube who had been in the same boat we found ourselves. He had done some legwork in researching how to play dominoes and put together a very helpful video explaining it for dummies like us. The video is totally awesome, and I recommend you watch it, even if only to see the Weird Al Action Figure play against the videographer! Hilarious. 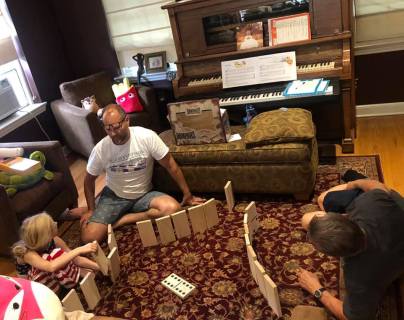 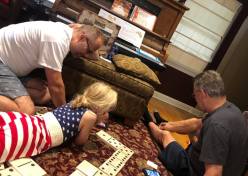 I’m not going to get into the game of dominoes here. I still need to do more learning and practice. Suffice to say, it seems to supercede all expectations of being able to use in the classroom. You can play with more than just two kids. It is simple enough, combining like numbers, but also strategic: It helps to plan which bones to use in what order. There is a lot of adding and even multiplication/division! But, believe it or not, you don’t actually multiply or divide, so it is perfect for planting the seeds for those future concepts: You have to identify “multiples of five”.

I leave you with this idea: I have been thinking about using Gamification in my classroom, because “everybody (seems to be) doing it”, and I like making school maximum fun! Through exploring articles and thinking about what I want to get out of the school year, however, it looks like “Playification” is more my speed. When I teach a lesson, I present a problem, and then students use what they know to figure out a solution. We then discuss additional possible solutions and ways to get to them. Finally, I let students “play around” with the ideas. “Try using it in a unique way,” you might hear me say, if you were walking by my classroom.

So, more than turning everything into a point system or changing pedagogy into games, I am leaning more toward using games to help my students “play more”. You can cheat a game. The only thing you cheat when “playing” is yourself.