“That makes me smile.” David Wiesner explained the effect of critics in a blog, “The Beginning“(Wiesner, 2020).

This account is left right there. That is all Wiesner has to say about it. “That makes me smile”; a four-word phrase that implies quite the opposite of violence…

Unless, the implication was to stimulate a “violence of thought”; Not “violent thoughts”; But, thinking so transformative, so life-altering, so paradigm-shifting as to be jarring–to clash with the cognitive systems already set up, that are comfortable and familiar.

The beauty, the magic of Wiesner’s work is that it raises more questions than answers. Why does the criticism of his very first professional art assignment cause him to smile? Did David Wiesner smile the moment he learned of people’s misgivings about his illustration? This statement is written in the first person present. Is he still smiling? Is this a constant source of laughter? What kind of smile is it? Condescending? Amusement? Bemusement? I can picture Wiesner’s emotions evolving through many smiles.

Why do we smile? We are told to smile. I tell my students to smile. My thinking has been that a reason for smiling will surface once you have begun. If we wait for a reason, it may never arrive. Jumpstart the happiness by raising the corners of your mouth. Smiling can be an act of violence, especially, when you don’t feel like it. You are waging war on your soul.

David Wiesner’s smile is a metaphor for this picture, drawn in 1979 for the table of contents of the September Cricket Magazine of that year. It was his first commissioned artwork. He had all summer to produce it. I bet at the end, after Trina Schart Hyman praised his work, he removed his spectacles, free to smile at his accomplishment. Having just graduated art school the spring before, David didn’t plan to enter the world of children’s literature. Like a cricket, chirping in the corner of the room, it beckoned him.

I first stumbled across David Wiesner when my daughter Scarlet became enamored with frogs. We found the book “Tuesday” (1991) in a used book store. We were drawn to the text by the beautiful cover. This tale of frogs flying through town, managing mayhem and inspiring mystery, was an instant favorite. We “read” it over and over. The word read is in quotes because this is a wordless book.

At first Scarlet and I were attracted to the artwork and frogs, but as we reread it, many more meaningful lessons were uncovered. How do you “read” a wordless book? I spoke to my emergent reader about what was happening in the images. We took turns asking each other questions and pointing out phenomena. We celebrated one another’s surprises: “Did you see this?!” How many “Oh my goodness-es” were uttered?

The “goodness” is that each reading was a goldmine of conversation between a daddy and his daughter. The lack of text makes the illustrations more open to reader-interpretation. The artwork lies somewhere between realistic and animation, just like the story line. Scarlet and I discussed how plausible it was for frogs to fly. The frog faces show expressions. How much do frogs feel or think? They seem to operate a remote control for a television in one picture. Do you think frogs could do that? Would they want to? 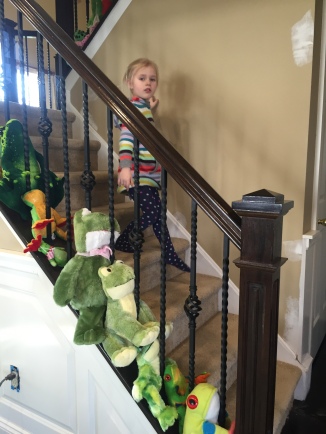 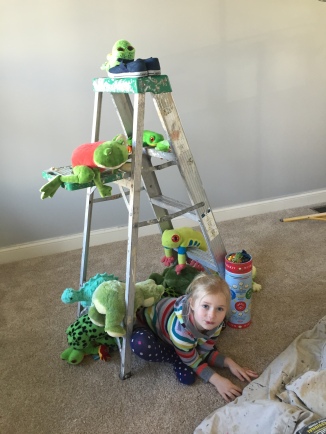 I use “Tuesday” in my third grade classroom to introduce the reading strategy, Questioning. It is the second day, and I have students write down questions while I page through the illustrations. We discuss the students’ questions along with how important “questioning” is, as a reading strategy. I am still finding details in the artwork that I hadn’t noticed before.

A book that I use later in the year that David Wiesner also wrote/illustrated is “The Three Pigs” (2001). This one may have text, but the storyline is much more dependent on the artwork, thus awarding it the Caldecott Medal of Honor. The three pigs discover a way to escape the mean wolf through completely exiting their story altogether! They then explore a parallel universe of nursery rhymes where they find a few other lost souls. The three pigs help extricate the characters in peril from their tales.

How do you explain “Out-of-the-box thinking” to youths? Share with them this “Out-of-the-book story” by David Wiesner. Practice the art of thinking this way by “rescuing” a character from a different book. Students could draw comics to illustrate what could happen if a character stepped out of their story to explore the outer world.

Another use of this thinking is to teach the uses of literary parameters. An author sets up “givens” that help readers interpret actions in a story. Readers won’t be happy if halfway through a story, the historical fiction narrative completely changes to science fiction, with aliens visiting from outer space. Even with our three little fugitive pigs, the illustrations and ideas are consistent throughout the book. They can visit other stories, but they don’t become microscopic and fall through the atoms of matter. In order for there to be “Out-of-the-box thinking” there must actually be a box.

Information about other texts by award-winning author/illustrator, David Wiesner can be found on the “Bookshelf” page of his website.

I leave you with this thought: The more mature a writer becomes, the less drawing fills his/her pages. A five-year-old only draws. Teachers instruct youths to add text. We get children to provide words to describe the settings they see in their minds. Develop character traits through actions. What word choice will perfectly convey the mood and theme of your story? Are we capturing and boxing up these young minds by teaching away the artwork? Perhaps the cages from David Wiesner’s illustrations at the start of this blog were setting the crickets free. Artwork is the music for text penned and sung. Let’s help our crickets sing their song.