Page 11 within introduction to “Learning Transformed: 8 Keys to Designing Tomorrow’s Schools, Today” by Thomas C. Murray and Eric C. Sheninger  (2017) discusses the typical high school diploma’s lessening value. The authors suggest that “the opportunities available for those with only a high school diploma remain in a freefall.”(Italics added 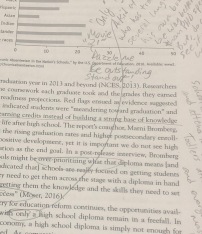 for emphasis.) This got me thinking. First, I made a text to film connection. Just recently I had rewatched the movie “21” (Luketic, 2008) starring Jim Sturgess, Laurence Fishburne, Kevin Spacey, and Kate Bosworth, and something that stood out to me more during this second viewing than the first was the premise for the whole movie: It opens with an interviewer asking Jim Sturgess’s character what he has done that stands out. Sturgess is applying for a grant that would fund his education at Harvard Medical School. The interviewer points out all of the impressive credentials that the applicant has earned, along with powerful letters of reference… But… he tells Sturgess that there are thousands of applicants with similar qualifications. He is going to need to “dazzle”.

Then, I got to thinking: What could students do to stand out? How about class? There is no shortage of articles streaming the Internet about declining manners. And, in my own experience, students who behave in an extraordinarily polite manner stand out as noteworthy individuals.

A year ago I acquired an iPhone 8 Plus. This phone has a dual photo lense. This allows me to use a feature called Portrait. When I activate this, I can focus on something and everything else goes out of focus. My photos have gone from “very nice” to “stunning”. Classy people capture the attention of those around them by displaying behavior that stands out. Capturing the focus of powerful people through being classy is an inexpensive way to add to the high school diploma. Here are six more “P” words that “phoster” class.

“In today’s global economy, a high school diploma is simply not enough for people to succeed” (Murray & Sheninger, 2017, p. 11) (italics added for emphasis). Thomas Murray and Sheninger’s (2017) book is for educators. It outlines things schools and teachers can do to align with the impending revolution of technology taking over the world. These ideas equip educators to provide the “more” that students receiving diplomas need to succeed. I look forward to reading the rest of the book, but I am happy to announce that just the introduction is extremely thought-provoking!

There are many other ways to stand out. You could fly to Vegas on the weekends, count cards, win tons of money, secretly live the highlife, and turn in a corrupt professor (Luketic, 2008). While that sounds exciting, I’ll at least begin with being classy.

Crouch, M. (2011, November). How to Teach Good Manners: Raising a polite kid in a rude world isn’t as hard as it seems. Retrieved August 21, 2018, from https://www.parents.com/kids/responsibility/manners/teaching-manners-kids/ [This article breaks down what manners are best to learn at different ages.]

Luketic, R. (Director). (2008). 21 [Motion picture on DVD]. United States: Sony Pictures.[inspired by the true story of the MIT Blackjack Team as told in Bringing Down the House, the best-selling book by Ben Mezrich” (Wikipedia)]