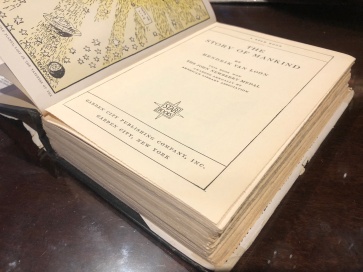 for its first-ever children’s literature award winner. Was the organization making up for only just now (1922) beginning to honor kids’ books? Were the organizers thinking they’d catch everyone up to speed? “This is what has happened in the past; Now, lets award one book each year.” I’ll tell you one thing: This is one classy history book. Here are 5 features I found to be extraordinarily classy.

1. Figurative Language: What struck me first and foremost was a combination of beautiful prose and mountains of metaphor. To begin at the end of the book, on page 482 Van Loon refers to the world as a “workshop”. He sees the steam, gas, and new-to-his-era electric machines forging a global factory. The story of Hendrik’s history ends a few

years after The Great War. He concludes the new world is a  place where political lines are as important as the edge of a concrete slab under a picnic pavilion (my metaphor;) Van Loon sees the “Iron Horse,” machinery in general, as the true victor of the First World War, running wild over, across, and through the entire world, regardless of man-made borders. Was he right? What would Van Loon make of today’s robots, not to mention the Internet!? The previous nearly 500 pages are teeming with as many metaphors.

Here is a fun passage for discussion:

And now that I have almost finished I discover that certain chapters gallop, that others wade slowly through the dreary sands of long forgotten ages–that a few parts do not make any progress at all, while still others indulge in a veritable jazz of action and romance. (p. 446)

Present Hendrik Van Loon’s self reflection prior to reading the text and then categorize the readings. Which chapters or sections would you label “gallop”? Are there any that were “jazzy” with action? Romance?

2.  Evidence-Based: The forever swinging pendulum seems to have exorcised more than 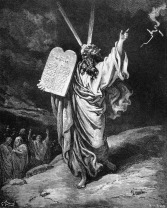 just public prayer from schools. A friend of mine told me recently that she was pointing out the similarities between the Greek myths and the story of Moses from the Bible. Her students had no idea who Moses was. Whether you are religiously-minded or not, this should alarm you. I am pleased to report that Van Loon mentions Moses, Abraham, and even Jesus in his history of mankind. He does this in a classy way. Rather than telling the reader what the Bible says, Van Loon provides outside sources. For example, a letter from AEsculapius Cultellus (Roman physician) to his nephew, written in 62 A.D. tells of a first hand account of treating Paul (the apostle) of the New Testament (p. 119).

3. Provides the People’s Perspective (a little): In addition to hitting many of the main events of history, Van Loon pauses to describe what life was like for a common person. Napoleon, his feats, the land his army conquered are all important facts to know. These

events affect the course of history. Van Loon provides more than just the basics in his blitz of history. He paints a picture of life for the Frenchman who was proud to take up arms to help Napoleon. The way the Roman Empire gradually usurped land and people, assimilating other cultures into its own is a lesson in and of itself, but learning about the life of a slave under Greek and Roman rule brings the everyday life of thousands to light. What was life like for them? It is easy to project attitudes onto others, yet the author of “The Story of Mankind” gets into the character of his subject illuminating everyday struggles and fears, helping the reader empathize with the characters in the story of history.

Here, I have a criticism. Of course with any history project it is going to be “The Story of Mankind” according to the author, who in this case is a Dutch-American professor from Cornell University. In his view Holland and England were heroes to the natives of the Americas in the seventeenth century (p. 324). With sympathy, he provides the mildly racist annotation, “During their first relations with weaker races, all European nations have behaved with shocking brutality.” Although it is interesting to read about France exploring and fortifying the Mississippi River, cutting English and Dutch settlement off from westward expansion early in the new world exploration, absolutely no attention is given to the “mankind” that already inhabited the Americas. Of course space is limited, but an entire chapter is devoted to the relationship between Russia and Sweden! One of the best books I have ever read, devoted to the people’s perspective, is “A People’s History of The United States” by Howard Zinn. Before reading this text, I did not realize that in the year 1491 the Americas were more populated than Europe and that the largest city of Europe paled next to the Aztec capital, modern day Mexico City. There is a youth edition.

Discussion Point: Page 449 suggests that “Athens and Florence, during the hey-day of their glory, had only one tenth of the population of Kansas City.” The larger-than-life influence of Greece and Italy on our culture makes it feel like these peoples must have had infinite populations. It was a bit of a paradigm shift to realize that a tiny group of people could have such a large influence over a vast amount of time. 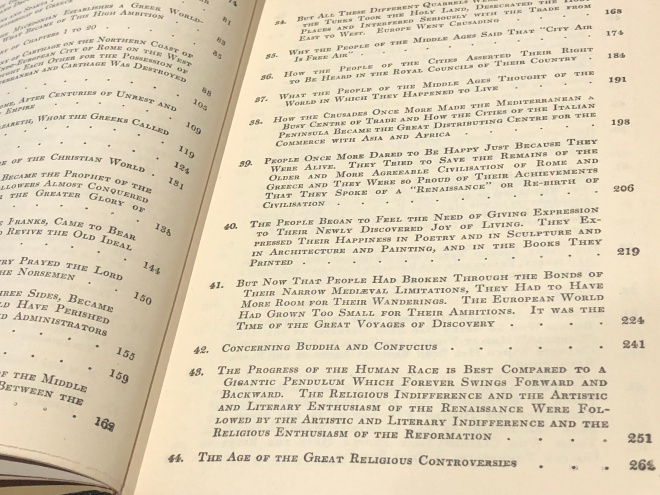 4. Thought-Provoking: An informational text is naturally going to be educational, requiring cognitive engagement, but Van Loon has a knack for skipping the boring stuff of history and presenting ideas that get the neurons fired up. He assumes the reader already knows the basics of the American Revolution. Instead of covering the main points, Van Loon attempts to shine light on the unique angles. In the United States we focus very much on the ground battles led by our hero, General George Washington. How much attention is given to the weakening of the English army by its enemies from the European mainland, and how much that affected the outcome of our revolution?

Van Loon does an excellent job pointing out that there is always many factors that contribute to a single historical event. The famous Congress of Vienna, that ended The Great War are referred to as “reactionaries” in the chapter on “National Independence” (p. 381).

5. Opinionated: Here is a topic deserving of its own blog. It is not classy to believe what everyone else believes, just because everyone else believes it. Believe something based on the evidence available and how much sense it makes. The classiest people possess their own independent opinions. With knowledge of subject and contemplative thinking, they form cognitive constructs that they then share with others. Additionally, they are prepared for varying opinions. An example of Van Loon’s “opinion writing” can be seen in the chapter “After Seven Years.” He explains that the men who were responsible for ending the First World War treated the, at that time (1921), modern situation as if it were colonial times (1719), rather than recognizing the rise of the industrial age and accepting a more global perspective. He points to the way they sat around a map and drew arbitrary lines dissecting land with little regard for the people and industries that lived there. It is heart-wrenching for me to read text written between the two world wars: “Meanwhile in their agony and distress the people will turn to the cure-alls offered by Bolshevism and Fascism” (p. 480). Was Van Loon a prophet? No. He simply took what he saw happening around him and formed an opinion. If only we can be so classy.

Here is an online version of the entire original text, complete with illustrations and hyperlinks from the index items to the “pages” containing the relevant information.

Child Development Institute. (n.d.). How To Talk To Kids About Violence. Retrieved July 16, 2018, from https://childdevelopmentinfo.com/how-to-be-a-parent/communication/talk-to-kids-violence/#.W0CQJzNKhE4

Zinn, H. (2007). A Young People’s History of the United States: Columbus to the War on Terror (For Young People Series). New York, NY: Seven Stories Press. [This was accessed for free via Overdrive through my public library. I read it on my iPad.]